A Savior For You 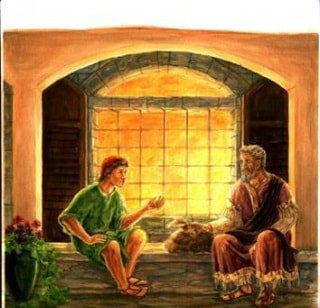 Are you a happy person? Fear and the guilt of sin can take away your happiness. You may wonder, “How can I be happy?”

I have good news for you! There is someone who can help you. He can forgive your sins and give you lasting happiness. His name is Jesus. Let me tell you about Him.

God loves us. He loves everyone in the world. God loves us so much that He sent Jesus, His only Son, to this world. When Jesus was on this earth, He healed the sick and comforted the sad. He opened blinded eyes. He taught the people many things.

Jesus wanted us to understand the great love that His Father has for you and me. He told this story that explained the love of His Father. You can read this in the Bible in St. Luke 15:11-24.

A certain man had two sons. He thought all was going well. One day one of the sons rebelled and came to him and said, “I don’t like this home, I want my own way, and I am leaving. Give me my share of the inheritance.” The father was very sad but he gave him the money and let him go. He wondered if he would ever see his son again.

The son went far away and enjoyed himself with his money and his friends. He carelessly wasted his money in selfish living. He thought he was having a very good time until suddenly his money ran out and his friends left him. He was all alone and needy. Now what should he do?

He went to a farmer and the farmer sent him to feed the pigs. He was not given enough to eat. He was so hungry he would have eaten the pigs’ food. He started to think of all the bad things he had done and how he had mistreated his father. He became more and more miserable. 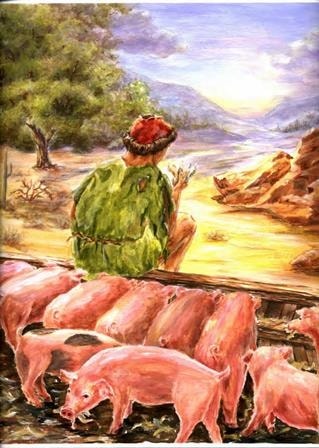 One day he remembered how loving his father had been and how well he had been provided for when he was still at home. Even his father’s servants had plenty to eat.

He thought, “Could I go back to my father after all I have done to him? Will he still love me? I am not worthy to be his son. I am willing to be just a servant if only he will take me in.”

Immediately he got to his feet and started for his father’s house. He would see if his father would forgive him.

The father had been longing for his son ever since he left. He often wondered, “Will he ever come back?” Then one day he saw someone coming in the distance. Could that be his son? When he saw that it was, he ran to him with outstretched arms.

“Father,” the son said, “I have sinned against you. I’m not worthy to be your son.”

But his father said, “Bring the best clothes for him and prepare a feast. My son was lost but now he is found.” 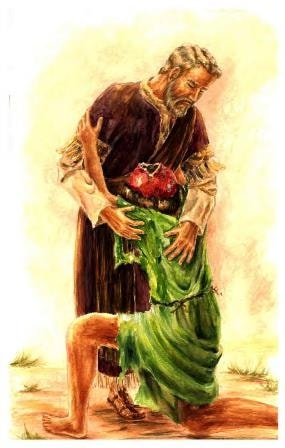 We are all like this son; we have all strayed from God, our Father. We have wasted the opportunities and many good things He has given us. We have lived selfishly and rebelled against Him. Today our heavenly Father invites us to come to Jesus. He is waiting for us with outstretched arms.

Jesus showed us His love by giving His life as a sacrifice for our sins and the sins of the whole world. He suffered pain and rejection as He allowed wicked men to nail Him to a cross. By the power of God He rose from the dead and lives forever.

Come to Jesus and ask Him to forgive your sin. When He sees you are sorry for the wrongs you have done, He will forgive you and wash away all your sin with His blood that He shed. It will be a wonderful experience! You will become a new person. Life will take on new meaning. Jesus will replace your guilt and fear with joy and happiness. He will be your Savior.